Recycling facilities continue to prove to be fire hazards as crews from three different areas are drafted in to battle the blaze over night.

The site located on Cobden St, Salford caught fire sometime yesterday, the cause is unknown, but the blaze is known to  have centred around a large pile of timber and rubbish.

Further details can be found here:

Would it be sensible to put one of these 50m from a Children’s Park and home? The Sky application must be opposed.

The owner of the Business and  Technology Centre on Green Lane is submitting plans to regenerate their property in line with the Bridgewater Master Plan initiative.  The property is opposite to the Sky Properties site, and such a plan can only be positive for the community and provides more weight to the argument against the nightmare incinerator.

The proposal includes a mix of residential housing and light commercial plans.  The development could bring many benefits to the local community including:

Owner of the property, Peta Williams of Castletown Investments Ltd, has supported the Say No campaign for many months and now is our opportunity to do the same.  It’s time to “Say Yes” to the Green Lane Waterside Regeneration Plan.  The plan is well thought out, will bring inward investment and improve the immediate and surrounding areas.  In order to do this, we request that all supporters and members write to the Council in support of this proposal.   The site is already designated as a “swing site” by the Council. This means that it’s being assessed for possible re-zoning from purely employment. Let’s give our support in favour of re-zoning. What are we requesting?

We are requesting that:

A meeting was planned this evening for the Monton House Hotel. Sky Properties were to be given the opportunity to pour honey into the ears of local business owners regarding the benefits that the “Eco Dump” would bring to their businesses.

It appears that businesses have already made their mind up and realise that what is bad for the community is bad for business.  The meeting has been cancelled due to “lack of interest”.

Sky Properties continue their attempts to dupe the public, local businesses and the Council into accepting their misleading information and inaccurate facts.

You can read more here at Salford Online:

It appears the only people who think this is a good idea are Sky, their cronies and their “you scratch my back” buddies.  Everyone else understands that it’s bad for business, bad for people and bad for Salford.

If there is an event you turn up to this year, make it this one. It has been a long haul to get to where we are today, and everything has culminated to this show of opposition.

Please turn up at the car park adjacent to the roundabout at the top of Canal Bank at 12:00 (midday) on Saturday September18th 2010. We will be marching with Wheeley Bins, in convoy, down to the site and back again.

What you wil need:
* Most importantly You!
* Friends and Family
* A Wheeley Bin for Each Adult (A colour of your choice). It should be clean and empty. This is not mandatory, but bring one if you can.

Optional:
* A Say No Logo Taped to the front of the Bin
* A Gas Mask (Available from Fancy Dress Shops)
* Placards.

If you will be attending this event, please RSVP. We are in contact with the local police and unless we can provide approximate numbers, we will not be able to protest. If there are friends and family attending who aren’t on facebook, please get them to confirm there attendance with an email to: info@greenlaneecodump.org

Spread the word. This is our chance to be heard. This is the big one.

Last Friday (August 27th 2010) a toddler was injured by a Viridor RCV.

“Police were called to an incident shortly after 1pm at Huddersfield Road in Denshaw, at its junction with Rippendon Road, following reports of a collision.

The vehicle, according to the police report, collided with two year-old Thomas Wilshaw, who was in his pram. The boy suffered head injuries as a result and was taken to Oldham Royal Hospital before being transferred to Manchester Children’s Hospital.”

Adding 160 Heavy Duty RCVs to the roads surrounding Green Lane brings a significant risk to pedestrians in the area. We maintain that the roundabout at the top of Canal Bank is not suitable for HGVs to traverse, and that access to the site hinders safe movement of such vehicles.  There have been several accidents on Green Lane in this and subsequent years.

We gratefully request that Salford Council reject this proposal.. Do not put our children at risk.  Our hearts and  thoughts go out to the family of Thomas, we pray a full and speedy recovery.

A Recycling Plant has caught fire in Horwich, Bolton. 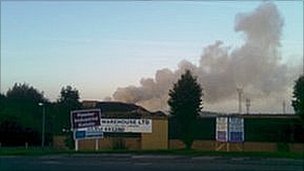 It’s taken several hours for fire engines to take control of the fire, causing serious to disruption in the area.  This continues to consolidate Eccles Residents concerns regarding possible incidents from the proposed Sky MRF plant.  The Sky plant is proposed to be  50 metres from a children’s park and only the width of the motorway lies between the plant and local houses.

Earlier this year the HSE launched an initiative to help organisations improve the safety of MRF plants. There have been an unusually high amount of deaths surrounding these plants prompting the HSE’s action: http://www.edie.net/news/news_story.asp?id=17555

The Sky proposal presents many risks to local business and residents, the only sensible response to the application is refusal

Today saw the deadline for objections to the Sky applications come and go.

We have had an enormous response to our requests for people to object.  We are still awaiting confirmation on the final numbers, but members of the campaign delivered a batch of around 250 objection letters to the Planning Department today, along with a group objection document.  We are also aware that there have been a significant amount of people who have personally sent their own objections in to the Council. The receptionist at the Council office  estimated that the number of objections already received was in the hundreds. Detailed objections were also received from local businesses and Hazel Blears MP.  We would like to thank the shops on Monton Rd for assisting with the objections and also the campaign members who pounded the streets posting the letters and getting signatures.

So what next?  If you have missed the deadline or have only become aware of the applications in recent days. Please continue to send your objections in.  Do this online while still possible, or via email.  If those two routes fail, try taking your objection down to Emerson House in Eccles.  Objections may still be accepted if they are presented within a reasonable time-frame.  Keep those objections rolling in.  Watch this space for further news of next steps in the campaign.

Lets Recycle have covered the current status of the Energos Plant in the Isle of Wight:

This is the only commissioned Energos plant in the UK. Since it was launched last year it has repeatedly failed to operated effectively, continually breaching EU limits which control emissions. The Environment Agency have mandated that a re-start plan be initiated that ensures that dioxins stay below the threshold set by the EU.

Local residents have started to express concerns related to dioxins and health risks.  According to representatives from Energos at the Monton’s December consultations, if the plants experience issues, the 180 ft tower can be used as a dump valve to release any pressure in the incineration chamber.   This would include any gases present. Although the Isle of Wight plant is in a non-residential area, emissions can carry for several miles. The Monton site is in the centre of a heavily populated area and next door to a Chlidren’s park and houses, failures may have more significant impact.

Map of Isle of Wight plant (bulding in the centre):

It seems hard to believe but Sky Properties seem to be stating in their application, that there will be little to no visual impact from the 180 ft emission spewing tower.  This 180ft incinerator stack will most likely be accompanied by a further 120 ft stack shooting vertically out of the Anaerobic Digestion plant.

Peel House is a 16 floor high rise in Eccles Town Centre. The average tree is the height of a 2 floor semi-detached.

Let’s put this into perspective.  Take one relatively flat surrounding landscape.  Now add a tower which is the same height as Peel House in Eccles Town Centre.  How can Sky possibly claim that this won’t be visible from the surrounding areas?  Don’t worry they also claim are going to plant some trees around the site, so you won’t be able to see the towers.  What utter nonsense.  Like most of the assumptions and statements in Mr. Hirsch’s application, this is clearly incorrect and a statement of fantasy.

Can anyone point me towards the nearest 180 ft tree?  Amusing and laughable as always.

We were also covered in this article: